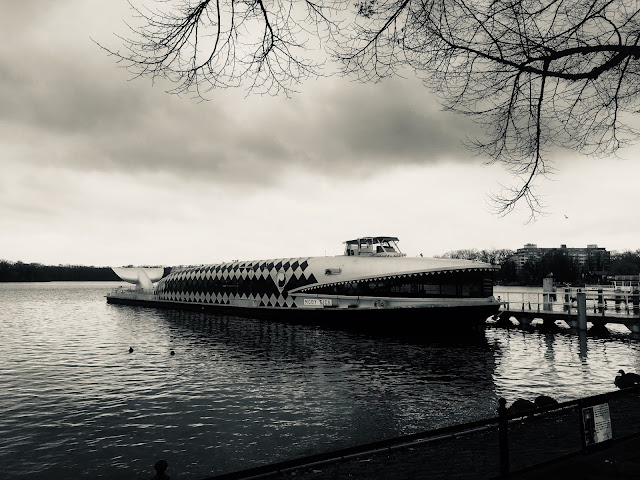 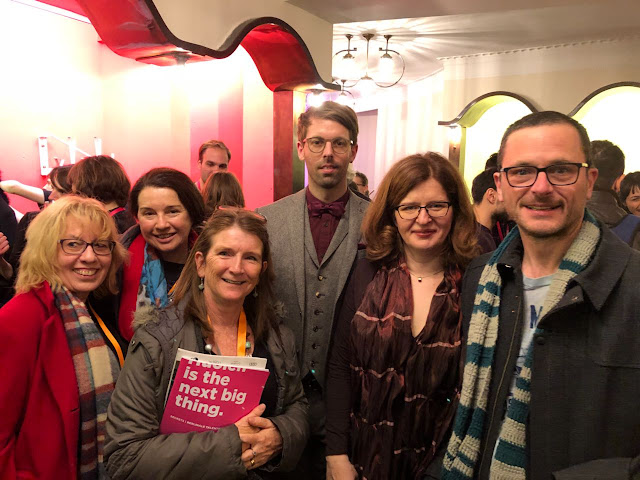 The 68th Berlinale has ended and we who have cuddled in cinemas for the past 10 days all seem to be sick - exchanging our ailments while coughing and sneezing. We are all sleep-deprived. I found it a disappointing year - and I'm not sure if it was just the state of my head. The Ecumenical Jury in my opinion certainly made wiser choices than the International Jury. Here is my report for Ecumenical News. The Ecumenical Jury at the 68th Berlinale for the first time in years chose to differ from the main Berlinale jury by giving the gong to a German film In den Gängen/In the Aisles by film director Thomas Stuber. The feature film had its premiere late in the competition and received raving reviews. It is about the dreary world of a wholesale supermarket in which the taciturn Christian (Franz Rogowski) is trained by an older colleague and falls in love with his colleague Marion (Sandra Hüller). Awarding the prize the jury said “When life is a supermarket what we need is not found
Post a comment
Location: Berlin, Germany
Read more

Change is in the air in South Africa 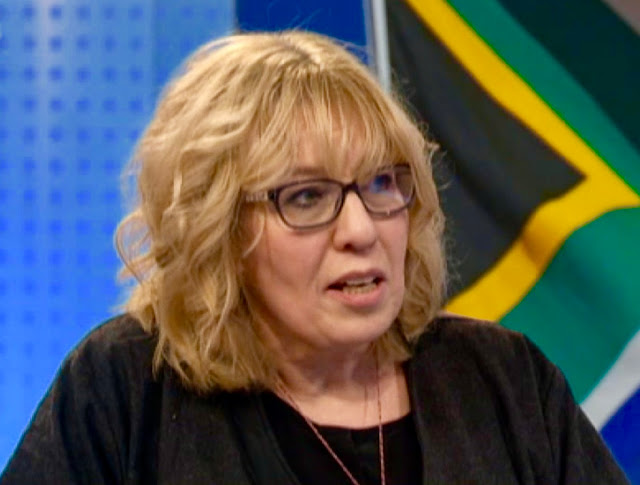 Change has been in the air in South Africa and I found myself quite often in the Deutsche Welle studios these days, explaining the changes taking place in my country.
Post a comment
Read more 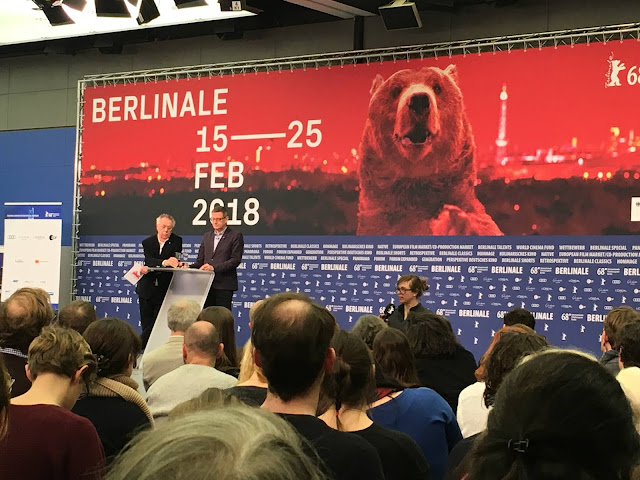 by Anli Serfontein Berlin  - Church representatives at the traditional Ecumenical Reception during the 68th Berlinale International Film festival on 18 February 2018 dealt with the profound consequences of digitization. "In the course of digitization, cinema has considerably expanded its possibilities of perfecting the images and creating an immersive experience for the viewer," said the chairman of the Publishers Commission of the German Bishops' Conference, Bishop Dr. Gebhard Fürst (Rottenburg-Stuttgart), said in his greetings at the reception. “There is no substitute for the shared experience in the magical darkness of the movie theater,” he added. On the other hand, there is a tendency in the "picture industry" for ever more perfectly designed pictures. Through digital editing, the image is increasingly removing itself from reality. "The images triumph over reality," Bishop Fürst said. The Rev. Johann Hinrich Claussen, the Cultura
Post a comment
Location: Berlin, Germany
Read more 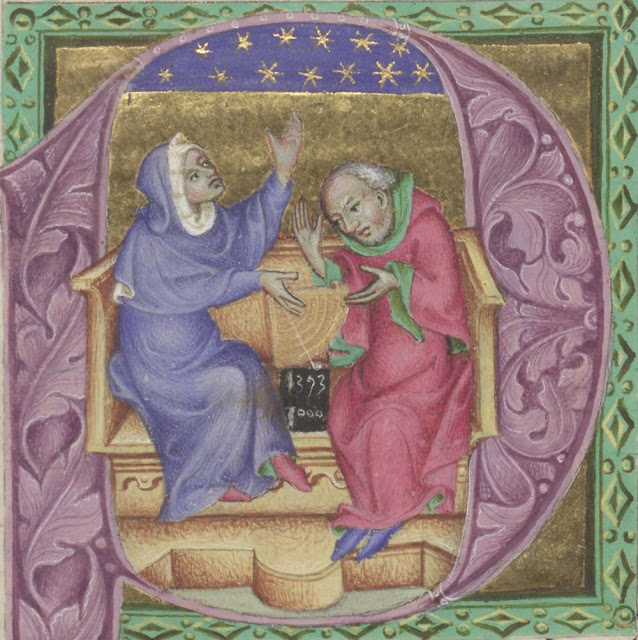 A fascinating exhibition and a story I did on it. by Anli Serfontein THE extent to which today’s scientific world is still based on intercultural and interreligious scientific discourse and the translated scriptures of Jewish, Christian, and Muslim scholars which date back nearly 1000 years is explored in an exhibition in Berlin. Devoted to the history of a millennium of en­­­­counter between cultures, the exhibition “Jews, Christians, and Muslims: Scientific Discourse in the Middle Ages 500-1500”, is cur­ated and compiled by Dr Andreas Fingernagel, of the Austrian National Library. It seeks to show how scientists from the three Abrahamic religions during this period co- operated, influenced each other, initiated a creative process of appropriation through trans­lations, and mutually benefited from inter­cultural dialogue in medicine, astrology, and astro­­­n­­­omy, as well as philosophy, ethics, and mathematics. “The subject of the encounter between cul­
Post a comment
Read more

Afrikaans in the heart of Berlin 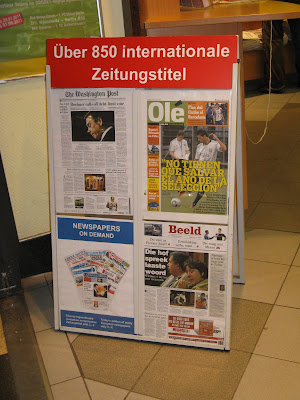 Beeld at Bahnhof Zoo (c) Anli Serfontein 2011 I had to do a double take as I walked in the crowdy Bahnhof Zoo in the heart of Berlin last Friday: There was the front page of the Afrikaans newspaper Beeld prominently displayed among the bustle of one of the busiest train stations in Europe. Up there with the journalism elite of the Washington Post! Thousands of tourists, locals and visitors passing by were greeted in my mother tongue Afrikaans!     After attending the Festival for Afrikaans in Amsterdam in June, it looks like Afrikaans has truly arrived on the world stage in the most positive way possible. Its is no longer the Pariah language of the apartheid oppressors! Beeld at Bahnhof Zoo in Berlin on July 29, 2011(c) Anli Serfontein 2011
Post a comment
Read more 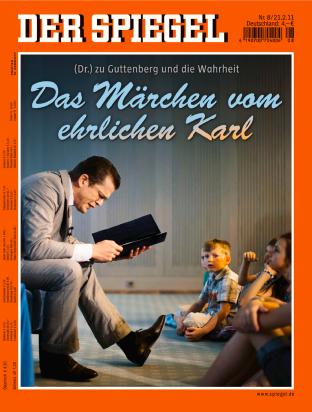 It has been a week where I was once again confronted with cultural differences in interpreting core social values. A popular, key Minister in the Cabinet of Chancellor Angela Merkel is caught out: a great chunk of his summa cum laude doctorate of Law was plagiarised. A scandal! Der Spiegel this week on the plagiarism scandal surrounding Germany's Minister of Defence But what shocked me most is not the fact that his doctorate was plagiarised. What shocked me was how the general German public viewed his plagiarism and how they urged him to stay on as a Minister. Worse still how his popularity rose with each passing day of this scandal week. Der Spiegel article A Facebook page was set up in support of him and it is growing rapidly day by day; the mass circulation red top newspaper Bild seems to support him. And a political survey shows that nearly 75% of the population thinks he is doing a great job, compared to 68% at the beginning of the month, before the scandal b
Post a comment
Read more 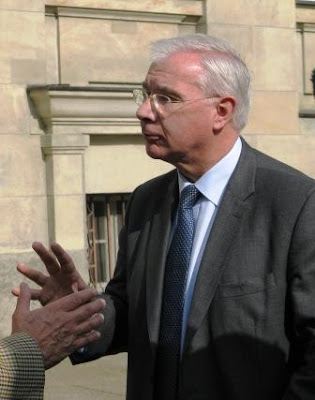 This morning I heard the sad news that Brian Hanrahan , one of the BBC's finest correspondents had died. I've worked with Brian, many times in the last decade covering mostly stories related to recent German history. He was thorough, seeking the truth, a sticker for details, good research and facts and more facts. So many times when I rambled on, giving my personal take on events, he said to me "Just give me the facts" (c) Anli Serfontein 2009 He was fair on those who worked with him and those he interviewed. He was a Mensch. Today I remember after a heavy day of filming, the many thought-provoking conversations we had over dinner in Berlin and Leipzig and Dresden and Cologne.  We talked about the media, current affairs, history, books and art. He certainly shaped my view of the role of journalists in our day and age.  At every shoot I learnt something from him. In Dresden he encouraged me to still visit the world-famous Zwinger art museum with only an hour
Post a comment
Read more 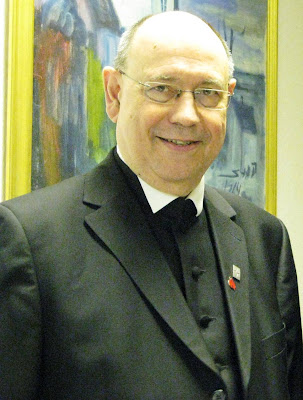 (c) Anli Serfontein 2010 - Nikolaus Schneider in Trier By Anli Serfontein Trier , Germany, 23 November (ENInews)--A European form of Islam needs to develop before a meaningful interfaith dialogue can take place on the continent, the new leader of Germany's 24 million Protestants has said. "We are only at the beginning of a serious inter-religious discussion on a theologically high level and that is because there are problems with finding counterparts," the Rev. Nikolaus Schneider told ENInews in a 17 November interview in Trier. "The imams who come from Turkey to Germany can hardly speak German and that means that we need to train imams in Germany at our universities," said Schneider, who was elected the new chairperson of the Evangelical Church in Germany (EKD) on 9 November during a meeting of its governing synod in Hanover. He had been the EKD's acting leader since February, when his predecessor, the Rev. Margot Kässmann, stood down
Post a comment
Read more 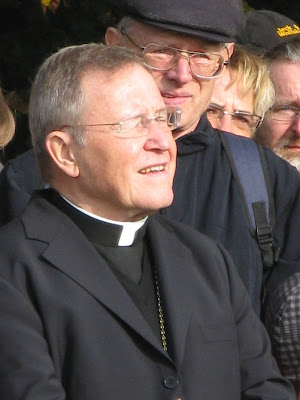 (c) Anli Serfontein 2009 By Anli Serfontein Stuttgart, Germany, 22 July (ENI)--The recently retired senior Vatican official responsible for ecumenical affairs has said his biggest regret during his tenure in Rome is that he did not achieve an agreement on a common communion with Protestants. "Today, there is a lot of convergence. So, we got closer to each other but we could not achieve the final breakthrough. I regret it very much but you cannot push the issue," said Cardinal Walter Kasper, who retired on 1 July as president of the Pontifical Council for Promoting Christian Unity. "The main thing that I did not achieve is the sharing of Holy Communion," Kasper told ENInews in an interview in Stuttgart, while attending, as a special guest, the 20-27 July assembly of the Lutheran World Federation. Kasper, now 77, became president of the Pontifical Council for Promoting Christian Unity in 2001; he had served the previous two years as its secretary. Originally
Post a comment
Read more
More posts

Anli Serfontein
South African journalist and author of "From Rock to Kraut" and "Basteln, Wandern and Putzen: From South Africa to Trier."